After hearing about Google acquiring PostRank, we went ahead and started to count the Google blunders or failures that we could remember. We love Google and there isn’t any question on the success of Google and its Search; if there was ever a champion for Web 1.0, Google would be the one. However after dominating one technology cycle these companies find difficult to dominate the next technology cycle.

Apparently, there are more than one would imagine: 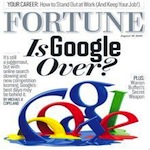 Google X was a version of the Google home page modeled specifically for Apple Mac users. The bottom of the page read, “Roses are read, Violets are blue. OS X Rocks. Home page to you”. Its hard to imagine Google crafting anything to Apple today, unless it’s a court document, and in fact Google X only survived for one day.

2. Google Catalog:
Google Catalogs, a search engine for print catalogs, languished in Beta from 2001 until 2009, when Google put it out of its misery, finally realizing the uselessness of a product that puts catalogs online, when only people who can’t use the Internet still use catalogs.

4. Google Video Player:
Google Video player was a standalone desktop application for playing Google video files. Google hasn’t fared well at entering a market late unless it offers a clear improvement on existing products, and it turned out the world didn’t need yet another video player with no real improvements.

5. Google Answers:
Google’s answer to Yahoo Answers, literally. Google employed paid researchers and asked users to bid for a response to their questions. But users, it seems, preferred their information free, even if free isn’t always best.

6. Google Wave:
Google Wave was supposed to reinvent email; bringing old-fashioned electronic mail together with new technologies like instant messaging and social media. It launched to huge hype, but users found it overly complicated and it died shortly after.

7. Wiki Search:
SearchWiki turned Google Search into a Wiki – logged-in users could move results up and down or delete results they didn’t like. Searchers can still start a result to mark it as a favorite, but the other wiki options went to the chopping block. Let’s see if they will be reintroduced in Google +1 updates.

9. DodgeBall:
Google bought Dodgeball; a mobile search networking services in 2005. The founder went on to leave Google and form FourSquare, now the leader in the location-based check-ins and social location advertising. Dodgeball closed down, FourSquare is booming, and Google has recently launched a new mobile app; Latitude. However, Latitude does not seem to be gaining popularity and is now being overshadowed by Facebook Check-In as well.

10. Jaiku:
Jaiku is to Twitter as Dodgeball is to FourSquare. Google purchased the micro-blogging services in 2007 but It failed to take off. This was not the first time in history that a market leader was missing the next technology bus.

11. Google Notebook:
Google notebook was a browser based application that allowed users to cut, paste, save and share text, links and images from the web to personal “notebook”. This functionality has been replaced by Google Docs.

12. Google Page Creator:
Google page creator was a tool to help users to create web pages, which were hosted on Google’s Servers. Google canned the product in 2008 to focus on Google Sites (not the first time it suffered from feature overlap).

13. Google Buzz:
In another attempt to keep up with Twitter and Facebook, Google launched this social network as an opt-out service for Gmail users, many of whom reacted angrily. Can Buzz overcome privacy concerns and slow growth? With the integration of Google +1, only time will tell.

If more come to mind, please inform us via comment below.