HTML5 is widely accepted as the new web standard for many browsers and devices, despite the fact that W3C says the language will not be “complete” and standardized until the end of 2014. Because of the wide and enthusiastic adoption across many platform, developers have begun using HTML5 in many of their projects — specifically those that would have required Flash in the past.

With the Adobe’s announcement to discontinue Flash and many devices not supporting it, HTML5 has quickly stepped in as the replacement. With HTML5 replacing the Flash Player, developers are using it on both standard web and mobile projects. One of its most attractive features is that it is completely open and controlled only by a standards committee, rather than by one parent company. 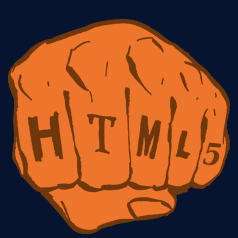 One of the most popular features of the new language are the HTML5 video tags. Now, video elements can be styled with CSS rather than in third-party programs or offsite. No more invalid embed elements! Instead, HTML5 incorporates the use of tags such as <video> and <audio> to make including multimedia on a site much easier. Scalable vector graphics also allow responsive design to be more elegant on all of the different screen sizes — and allows designers to breathe a little easier about Apple’s advances in retina display.

Even Adobe endorses HTML5 on mobile browsers. Many designers and developers were concerned about “bad” blood or cross-compatibility issues, but Adobe stays involved with several browsers and even Apple to help the user experience, and have given HTML5 glowing reviews.

Keep in mind that HTML5 is a new territory and must be done properly; this is why we recommend professional web designers with extensive experience in custom website design and development using HTML5. The language itself is several years in the making, but designers and developers have only added it to their arsenal within the last year or two, so it is important to work with someone who is well-versed and has experience in order to use the powerful benefits of HTML5 properly.

In all, the end goal of HTML5 and its predecessors (HTML5.1 has already begun development) are working to make design and programming language much easier. With so many browsers, mobile devices, and languages working in the world today, having a “fully integrated” language is becoming more and more essential. It works to be backwards compatible as well as opening new possibilities for future web developments. It is an exciting and ambitious approach that design and development desperately needs today!