Open up Google and type the words “completely wrong.” Chances are presidential candidate Mitt Romney’s name or a picture of him will show up. To those not knowing better, this might appear shocking. The truth of the matter is that the republican candidate brought this upon himself; but this in no way takes away from the power search engines can have. A few weeks ago, Romney called comments in response to his statement about 47% of American living well at the expense of taxpayers “completely wrong” (TheProvince). 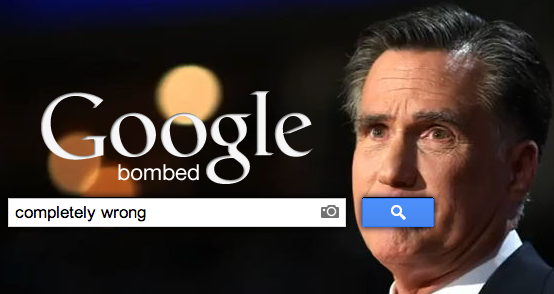 This response gained immense popularity at the time, and due to the magic of the web, the search for these words becomes instantly associated with the party member’s name. The kicker is that the results can be found in Google Images. It doesn’t take much to realize the irony in the matter. Ultimately, Romney set himself up for disaster without even knowing it. By promulgating words of defense, the end result has been a major backfire. When it was said, the election was just a couple of days away and it certainly does not look good to see a picture of Romney’s mug with the words “completely wrong” hanging above. Maybe this will serve as a lesson in how (negative) internet marketing works.

Though Google is working to make it more difficult for things like this to happen, they are doing so to prevent unwarranted attacks by those attempting to sabotage search results, it cannot do much to prevent individuals from bombing themselves, as is the case with Romney. We can just simply call this a bad campaign method. Had he been aware of the statistics, he might have chosen his words a bit more wisely. For instance, he probably did not know that Google gets roughly 5 million searches a day (Statisticbrain).

Numbers this high warrant attention, especially given the fact that they continue to climb at astounding rates. Google is the most widely used search engine, and Romney’s advisors should have known what the repercussions were going to be. The search is now viral, and users have made their own personal twist on the matter. The images that show up in the search range from images of Romney’s face to ones bearing catchy captions.

The point to take away from all of this is that search can be used in very good and bad ways. Knowing how to make it work is vital to securing potential viewers (or voters). Romney is not the only one that failed in this arena, as President Bush has his share of bombing in 2003, when the term “miserable failure” became linked to his name. A word of advice for future political candidates: choose your words wisely, because you never know if they will come back to haunt you.